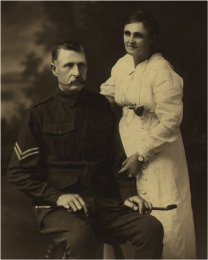 Thomas was born in Hognaston, Derbyhsire in 1815 and arrived in Australia from Nottingham, England as a convict aboard the Lloyd in 1833.

His period in Australia between 1840 and 1854 remains a little hazy and is proving one of the most puzzling aspects in piecing together the Allsopp lineage in Australia. A number of theories have been forwarded by various researchers.

It is known that he lived in the Ashfield, NSW area up until 1860 when he moved his family to the Bathurst - Sofala - Orange triangle of New South Wales. Thomas died in 1891 in Sydney, NSW.

Pictured at left is their son Thomas with his wife Sarah Amelia Verran. It is thought that this photograph was taken around June 1917 when he served in the AIF Home Service as a Guard at the German Internment Camp, Holesworthy, NSW. Thomas was the youngest child born to Thomas and Jane.